Class 4A: Cartersville defeated Spalding 2-0 and 11-1 in 5 innings. Will be at home starting Tuesday in semifinals. 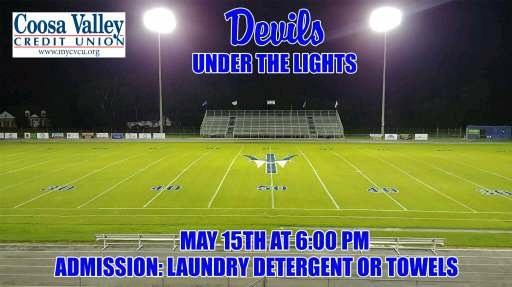 Spring football for the Model Blue Devils next Tuesday.

Friday: Coosa will be playing Jacksonville (Ala.) High and LaFayette in in a football scrimmage. “We will begin the fun at 5 p.m. There will be food trucks – BBQ, Mexican, Cagle’s Southern Eats, Spartan Smoothies, shaved ice and pies. Come eat, take pictures at the photo booth, enjoy music (5:30 p.m., the live music from Hunter & Chase will start) and watch some football.” Tailgating begins at 5 p.m.

Rome Braves were off Tuesday; at Augusta for double-header beginning this afternoon at 5:05 p.m.

Mills Fitzner’s photo gallery for the 2018 season and before.

The YMCA’s Arsenal Rome Select and Academy teams are winding down their regular season games and beginning the tournament season. The B11 and G9 Academy teams won their divisions in the Chattanooga Scenic City Cup. The Select teams earned a 3-5-1 record to bring their season record 26-24-6.

Georgia High School Association State Track & Field Championships at  Berry College’s Clark Track and Dickey Field at Valhalla Stadium, Thursday-Saturday. Berry will host the A Private, 4A and 7A divisions, welcoming some of the top athletes in the state. Click HERE for the full meet schedule. Live results are available throughout the weekend at this link.

Class 4A: Cartersville will host Spalding today in the quarterfinals.

Class 3A: Calhoun beats Windsor Forest, 2-1, will play Westminster Friday at 7:30 p.m. at McEachern for the state championship.

The Berry College softball team will face the Hornets of Lynchburg College at Emory University to open their fourth straight NCAA Tournament appearance. Competition will begin on Friday, May 11 in the double-elimination regional in Atlanta.  Game times are still to be determined.

F&P is having its annual charity 5K on June 16 and this year, all of the proceeds this year will benefit Harbor House. “This is a great opportunity to support us and the community. You can use this link to register: https://bit.ly/2JFEdsu. Also, you can print the waiver form and take it to Garner and Glover Company, F&P Main Plant or Cycle Therapy. F&P Georgia Mfg